Amazing Man was one of, if not THE, biggest stars produced by Centaur. Among one of the earliest heroes to jump on the Superman bandwagon, he was also an early creation by Will Everett who would become more famous for Namor, the Sub-Mariner and a host of other aquatic heroes (and who strangely had nothing to do with the Shark, Centaur's resident underwater hero). Amazing Man's abilities came from one of those hidden mystic Tibetan retreats but he was not a mystical hero such as Chandu but a very physical and violent one, echoing early Superman and Wylie's Hugo Danner.

Even if Aman, as he was sometimes called, didn't originally last beyond America's entry into WWII, his legacy was long lasting. In the 1960s, Pete Morisi would lift many story elements for his more contemplative philosophical hero Peter Cannon, Thunderbolt. Marvel would also go to the same well for the origin and back story of Iron Fist. More recently, they acknowledged that past by introducing a mystery man called the Green Mist into the Iron Fist canon, another name that Amazing Man was sometimes called. In between, DC would introduce an African American hero called Amazing Man in the pages of All-Star Squadron who would cast his own extensive legacy. Malibu comics would bring back a version of the original in the pages of The Protectors, a re-imagining of the Centaur characters on one team. And, then, there is also DC's charming 'Mazing Man.

Amazing Man also gave readers one of the first true great super-villains, the Great Question. He opposed Aman from the start and under several different names and guises, he fought Amazing Man in almost every story up to the end of the run. As the Great Question he dressed in robes and with his face covered by a hood with a question-mark on it AND he possessed powers, some of which dwarfed Aman's own. He stands unique.

In addition to his strips, Amazing Man was regularly featured in small text stories. This is from issue 19 of Amazing Man Comics, 1941. More of the comic can be found at: www.goldenagecomics.co.uk 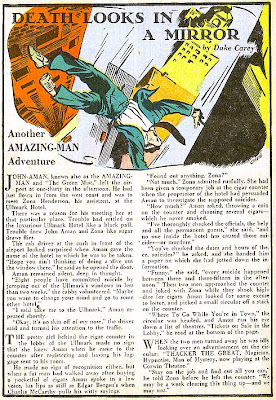 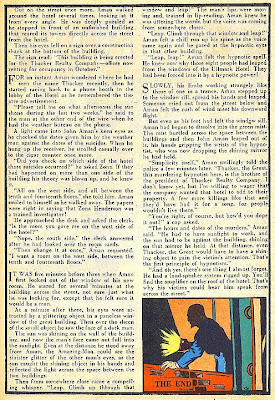