The White Panther raced through the jungle. In addition to the power of prophecy, the White Panther had been gifted with great speed and endurance. For a normal person foolhardy enough to make the journey alone, it would take several days to make it to the temple. The terrain was tough, the jungles almost impassable at places. He knew these jungles. He knew where the trees thinned and opened up onto a great savannah. His pace quickened. It was still morning when he sighted the temple. He slowed his pace to a reverent walk, where he could easily be seen and judged as one who comes as a friend and ally.

The temple was unlike most African structures. It was a stone pyramid with the entrance near the top and very ancient looking. It spoke of old days when an advanced civilization once stretched across the lands. Now, only a few places like this stood as reminders of those times. He saw a white woman with blonde hair come out of the entrance and looked down at him. He raised his hand in a friendly greeting.

“Hail Fantomah,” he cried. “Keeper of the . Beautiful Destroyer. She Whose Gaze is Death.”

He couldn’t see it, but he was sure she smiled. She turned her back to him and went inside, an invitation that was free to approach and enter. If he had been unwelcome, she would have come down and met him at the foot of the pyramid.

He jogged up the steps and entered the temple.

“Hello Fleet Footed Cat,” she greeted. “You have come to see the Lady of the Cats?”

The White Panther nodded. “If it is at all possible.”

“I was told you’d be coming. I’ll be leaving you to your prayers.”

With that she exited the temple.

The White Panther lit the braziers and sat cross-legged on colorful rug. He closed his eyes and opened his other senses to the world around him. He could hear the birds calling outside as well as the crackle of the flames. Smell of smoke tickled his nostrils, tinged with the manure that fueled the flames. A slight breeze drifted in from the eastern doorway. The sun rose to mid-day and slowly drifted to the horizon as a half-moon rose and stars came out and progressed across the sky. And the sun rose again, dawn breaking. And, the White Panther sat with his eyes closed, his breathing regular.

“Greetings young one,” purred a feminine voice. The White Panther opened his eyes and saw that a tiger had entered temple. The cat, which belonged in another country entirely, slowly morphed into a lioness and then it stood on its hind legs, taking on a more human form until what faced him was a slender tan beauty though with the head of a cat.

“Your countenance is troubling,” she said.

“I dream of war, of death, of destruction. Of this land, of these peoples. Of myself.”

“I know. It has been foretold. Dark days have long been coming though we had hoped they’d pass us by. What would you have me do?”

“An army will be coming to this land and destroy everything we know. Unless you and the gods do something to stop them before they reach these shores.”

“Ahh, but we have done something my child. Who do you think gave you your dreams? Gave you your powers and others like you? An army of death comes that will take an army to stop them. And, we have given you the means to gain that army if you are willing to raise it.”

“What about Fantomah? Is she part of your army?”

The cat goddess looked at him and looked as if she was smiling slightly.

“My army, yes. Yours, no. Her power is vast but only because she is tied to this land itself. She can only leave here if she so chooses to give up the ties that bind her here. But, there are others, plenty of others, some on different realities than the one you see. It is they that will be your army if you can convince them.”

“Why must I convince them? You have given them their power, can you not command them to serve?”

“Foolish child. You cannot command devotion, loyalty, courage, or faith. I can inspire and show the path, but it is up to each to choose it.”

The White Panther nodded, sensing the truth of her words. “So be it,” he said and bowed his head. When he looked up, the cat-goddess was gone. He knew his next stop. To visit the so-called Jungle King who was building a very modern city on the coast. He’d have ways to contact others. He got up and walked outside, seeing Fantomah walking up the steps of the pyramid.

She smiled. “Did you find the answers you seek?”

“Yes, though not the answers I wanted.”

He nodded. “Farewell and live in peace.”

Posted by cash_gorman at 4:02 PM No comments: 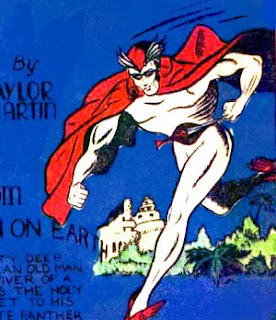