This story is from Wham #2, 1940, published by Centaur Comics. Centaur was an early publisher, lasting just a few short years, gone by 1942 when for some publishers the golden age was really just getting started (Superman and Captain Marvel would be selling over a million copies each). But, in their first couple of years they had many creators working for them who would become well known for many characters outside of Centaur. Such as Will Everett, Carl Burgos, Frank Thomas, Tarpe Mills. Centaur's break-out hero was Amazing Man who would serve as influence for later characters such as Iron Fist and Peter Cannon, Thunderbolt and the like-named Amazing Man of Roy Thomas' All-Star Squadron at DC.

This story features an extremely minor character even by GA standards called Blue Fire. He's rarely mentioned in comic book histories and was not part of the revival of the Centaur heroes by Malibu as "The Protectors". It is interesting to note that unlike many heroes, he's given a bona-fide super villain with powers to fight in his first story. Blue Fire is really Jack Knapp, a young scientist (from references, in college, possibly a graduate student) and is about to imbibe a potion of his own concoction when a formula explodes. It doesn't do any damage but leaves Jack surrounded in a corona of blue flames. The flames do not burn or consume and Jack soon discovers that it leaves him mostly immaterial. He can gently pick things up and a test shows that he can put handcuffs on, but with little effort, can pull his hands apart and through the handcuffs. As this makes him bulletproof, he decides to fight crime. As he faces his first opponent, a frozen saboteur calling himself the Frost, he discovers that the powers have a drawback. He cannot be shot or punched, but likewise he cannot punch his opponent.

The powers fade after about two hours, so Jack has made a supply of small bombs made from the formula to power up when needed. He has some foreign language skills and his father has some pull with either the authorities or the ship lines as Jack is able to get a pass to investigate the strange acts of sabotage aboard some ships. An interesting nod to another feature by the artist, the skiff that Jack takes to the ship is called "The Shark".

In this text story from the same comic, Jack is called Dick for some reason. The artwork on the first page is by Frank Thomas who also did the Eye strip for Centaur among others. The idea of a hero whose powers were as much a detriment as an asset apparently did not prove popular at this time. However, Marvel would get some mileage out of it in the 1960s when the world was ready for slightly more down-to-Earth superheroes. 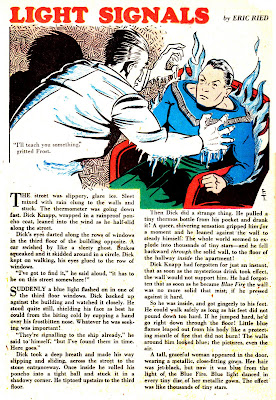 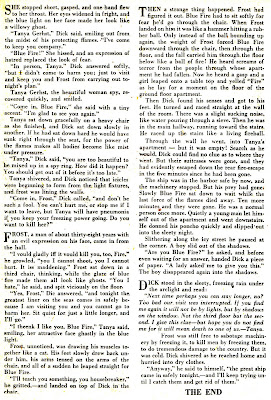