Mystery Man by Will Eisner

Mystery Man is a bit different from many of the masked heroes of the time in that he not only appeared just once, but also only in a text story. Add to that, his creator is credited to be no other than Will Eisner! Through his studio, Eisner has a long list of characters that he contributed to in their creation and is known for not only his groundbreaking work on The Spirit, but also the work of later years, always pushing the language and storytelling of comics and art, merging the narrative of words with art. Thus, it's strange to see a story that's all text with just a few illustrative panels. It's also far more straightforward than much of the work that he later became known for. If not for the credit, I wonder if anyone would have been able to attribute the story? Are there uncredited Will Eisner stories and creations out there? Notice the name of the villain is given as Dr. Death in the artwork, but Mr. Death everywhere else.

Mystery Man appeared in 1939 appropriately enough in Mystery Men Comics #5 by Fox. More of the comic can be seen at www.goldenagecomics.co.uk 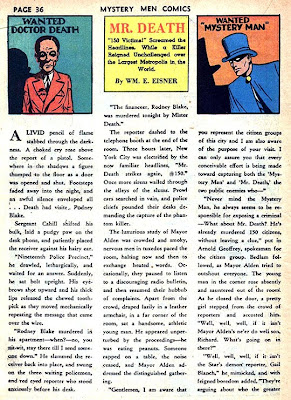 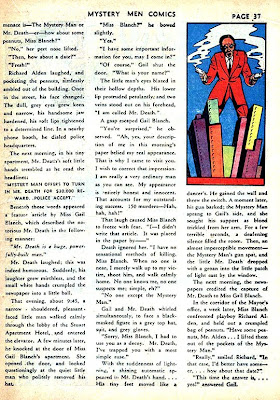